In modern-day Iran, as in other nations, food is a shared pleasure and an expression of love. The kitchen, osh evi in Azeri (osh house) and osh-paz-khaneh in farsi, translates as osh-cooking-house. The word osh is anything that is cooked. Now osh is used for a pulse and herb based broth which varies in flavour depending on the vegetables available in each season and the occasion.  I suppose it is rather like pottage. Herbs are cleaned and dried in the summer months to be used for osh in the winter. For me, Osh is the taste of home.

Most home cooking is done by mothers and grandmothers; however, it is usually men who are chefs in restaurants. Food is traditionally served on a large sofreh (table cloth). The elders and more esteemed guests typically sit at the head of the sofreh.

The cuisine of Iran varies from region to region. I am from the north west of Iran – Tabriz, in Iranian Azerbaijan.  Azeris are famed for their cuisine and hospitality; and also for being stubborn!

Now, with the increase of imported food and modern agricultural techniques, most ingredients can be found in Iran all year round. When I was a child, it wasn’t so, and we would look forward to the first unripened plums, gojeh sabz and green almonds, chaghaleh badum, or to making fresh pistachio skin jam.

Traditional Irani cooking is healthy, nutritious & varies according to the seasons. It uses very simple ingredients which are treated individually before being brought together in a dish. Most dishes call for simple, slow cooking where the flavours have a chance to mingle and infuse together. Iran’s cuisine, much like its art and music, is imbued with complex subtlety.

Almost all dishes can be served with or without meat. Saffron or zafaran as we call it, is always used to colour and scent the food.  It is hardly ever thrown into a dish in strands; rather it is first made into a saffron tea.   Nuts and herbs are not only used for garnishes but also as ingredients in their own right.

It could be said that the national dish of Iran is rice and kabob, chelow kabob.  There are two ways to prepare rice. Most people are more familiar with the preparation of kateh. This is where we use about one and half to twice the quantity of liquid to the quantity of rice; it is absorbed by the rice during cooking. The second way, chelow or polow, is made more elaborately.  This is the type of rice we usually prepare. It requires the rice to be boiled (like pasta) until it ‘dances’ in the pot, sieved, and then put back into the pot, ‘wearing a turban’ .

In the past, people didn’t want to waste a grain of rice and as the pots or heat sources were not standardised, in order to protect the rice from sticking to the pan, they would first put in a piece of bread or thinly sliced potato before pouring the rice in to steam. This protective layer is called tah-dig; literally, it means the bottom of the pan, and is a tasty treat.

Rice prepared as above can be served plain and is known as chelow. This is always accompanied with a tagine/curry style dish known as khoresht or you can add layers of spices, herbs, vegetables or meat to make coloured polow. These mixed rice and khoresht are usually based on seasonal ingredients. In the summer, this might be fresh tomatoes, courgettes, aubergine and herbs;  in the winter months, spices, pulses and dried fruit or herbs are used.

Other non rice based dishes are generally served with bread. Bread is usually bought daily, and in my day, this was the responsibility of the youngest in the family.  There are bakers on street corners, each specialising in a different type of bread, as the preparation and cooking methods vary somewhat. They open at particular times and long queues for bread may be observed at these times. As my mother is from a town called Osku, famed for its lavash – a very fine flatbread – lavash was our daily bread. We bought other bread for special dishes.

Azerbaijan is known for many dishes but my home town of Tabriz is know for it’s koofteh or chufta as we call it in Tabriz.  This is a meatball filled with nuts, berries, plums, fried onions and either an egg or a whole chicken depending on the occasion.  Koofteh still creates much excitement and ceremony when it is served.

I can’t really complete this introduction to Persian food without mentioning dizi / ob Goosht, or “meat water”.  Chickpeas (other pulses are also used) are cooked for a long period in an earthenware pot known as a dizi or as we call it piti in Azeri with lamb, saffron, and some vegetables. It is traditionally served with a bread called Sangak, or little pebbles. This triangular flat bread is cooked to order in an oven on little river pebbles. It is not uncommon to see people flicking the hot stones off their freshly baked sangak as they walk along the street. When the ab goosht is ready,  the stock is poured into a bowl and eaten with sangak croutons.   The meat and pulses are then served.

At gatherings or parties the hosts showcase their cooking skills by cooking many different dishes; these are, for the most part, served at the same time. We don’t have service a la russe.  We usually begin a meal with a soup or osh and that is followed by several polow dishes and khoresht to go with chelow. Side dishes may include aubergine, frittatas/kookoo, salads, plates of herbs, pickles and bread, all beautifully decorated with saffron, spices, nuts and herbs which are ingredients in the dishes rather than just a garnish. 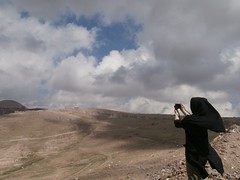